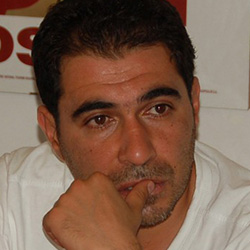 Ayham al-Fakhry is a Syrian archaeologist. Originating from Raqqa, he studied archeology at the University of Damascus and graduated in 2004. His passion for archaeology led him to work in this unique and demanding environment.

In 2013, the General Directorate of Museums (DGAM) appointed him director of antiquities in Raqqa. As the last curator of the archaeological museum of Raqqa before IS took over the city, al-Fakhry made inventories of threatened collections and tried to hide and safeguard the artifacts. Since then, he has participated in projects to protect and track the looted artifacts from Raqqa and Syria.

He has acted as vice president of the National Museum of Damascus and vice president of Archeological Affairs in Syria. Al-Fakhry now lives in Strasbourg, France, and continues to work on projects to protect Syrian cultural heritage.