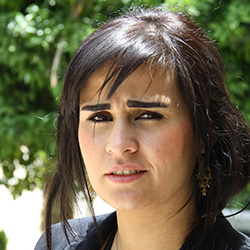 Rasha Hakki is a Syrian-Palestinian archaeologist. After graduating from Damascus University, she completed her studies at BYU University in the USA. As a staff member of the Directorate General of Antiquities and Museums (DGAM) in Damascus, she participated in a project to document mosaics kept in Syrian museums in cooperation with the European Centre for Byzantine and Post-Byzantine Monuments. After the outbreak of the Syrian crisis, she worked to report the illegal trafficking of stolen Syrian artifacts.

Hakki coordinated a Local Community Development Team to support local Syrian communities in engaging with their shared past. She developed workshops in cooperation with the Institute for Digital Archaeology in Oxford for refugees, especially children, to encourage them to protect cultural heritage.

After she arrived in the Netherlands she began to rebuild her heritage network through Dutch and European cultural organizations. She became active in helping Syrian refugees integrate into their new communities and she participates in initiatives to protect Syrian cultural heritage.